I speak to you as a member of Danish PEN 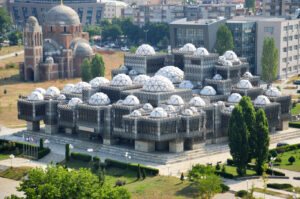 Tetova, March 4, 2000,
First of all I’d like to thank Mr. Xhevat Ademi and The Forum of Political Prisoners in Macedonia for inviting me to Tetova. I’m very pleased to be here, although the reason for this meeting is rather grim.
I speak to you as a member of Danish PEN, part of International PEN’s world-wide community of writers, journalists, editors and publishers. I am here to express the solidarity of my colleagues in Denmark and around the world with those writers and intellectuals whose fate is still in the hands of the Serbian regime.
I speak to you as a writer. I am not a politician, and I am not concerned with politics.
I am concerned with human experience, human thoughts and feelings, whoever thinks or feels them. I am concerned with the human right to express your thoughts and feelings, your dreams and hopes, whoever you are, and whatever it is that you dream about and hope for.
However, that universal right becomes a political issue every time it is violated. And that is why writers may have to commit themselves politically, whether their writings are political ot not.
As we all know too well, freedom of expression is not the only human right which has been violated by the Serbian rulers in Kosova over the past ten years. As a civil person I have been as shocked and dismayed as everyone else in the West by the cruelty committed against civilians in the cities and villages of Kosova. But as a Western writer I also feel an obligation towards those colleagues who suffer from censorship and who are abused, persecuted and sent to prison just because they have used that freedom of expression which I myself can take for granted.
n societies without freedom, writers are in potential or real danger because their writings seem to pose a threat to those in power, even when they write nothing but poetry or fiction. But why is that? How can words alone be so dangerous to those with guns in their hands?
Dictators tell us that people are different, and they exert their power by dividing us. Their power is built on hate, exploiting the historical and ethnic differencies which have drawn borders between people. Some writers are willing to become the mouthpiece of those dictators, confirming the mythologies of hate. But when they do, they betray what is the universal quality of literature and all other intellectual endeavors.
Although most writers write in their native language, and although their books will always be part of a specific national and cultural tradition, the greatest works of literature are those that cross the borders of time and space, telling us that we belong to the same mankind. We all know this, and yet we tend to ignore it.
On the one hand you may say that world literature reflects a world of differencies in terms of language and culture. And in that sense we are all strangers, writers or not. On the other hand, there are no strangers in true literature. It allows us to recognize our own humanity in strangers, whether they are characters in a novel or people living on the other side of the border.
Literature reminds us of something so obvious that we sometimes don’t see it: When people suffer, their pain is the same, whoever they are. And when people hope for freedom and a better future, that hope is just as universal.
I guess that is what makes literature and other intellectual activities so disturbing to dictators, including the one in Belgrade. And when a writer voices the experience and hopes of his or her people – experiences of loss and suffering, hopes of freedom and democracy – then literature is not only disturbing but also threatening to the lies and the hate by which dictators rule.

These thoughts have been expressed lately by one of the Albanian writers from Kosova for whose sake we are meeting here today. On December 9 last year, when Flora Brovina was brought before a Serbian court, she told the judge that having dedicated her life to children, she had acquired an important truth: that children, in their wisdom, don’t give a damn about ethnical differencies, that what they really care about is the goodness in a person; that hatred of the other is spawned by the parents’ indoctrination. She also said:
I am very happy that my homeland is not of that size you proscribed. My country is much larger. My country extends to every place where I have friends and where my poems are being read.
I have come here to confirm that Flora Brovina and Professor Ukshin Hoti and their imprisoned colleagues have friends all over the world. Friends who not only read their poems and novels and essays but who are also deeply worried about their present situation. We follow that situation closely like we have done in the past, and we shall keep doing so, exerting whatever influence we have on our governments, telling them not to forget these hostages of the criminal regime in Belgrade.
According to international human rights groups, the fact that these Albanian colleagues remain in Serbian prisons is a violation of the Geneva Convention. It is totally unacceptable that they should be sacrificed as the price to be paid for the present, fragile peace agreement.
On the contrary, it must be made clear to the international community that a solution to this intolerable situation is vital to any long-term settlement for Kosova. Consequently, the sanctions against Serbia should not be lifted before the Albanian prisoners in Serbian prisons have been returned to Kosova so that their cases may be investigated under the supervision of the KFOR authorities.

However, it is not only Albanian writers and intellectuals who are being persecuted and abused in Kosova. International PEN and other human rights organizations are increasingly alarmed that abuses continue to occur in Kosova, six months after the withdrawal of Serbian police and army troops.
Thus, PEN is extremely concerned by the plight of around 30 writers and academics from Kosova, the majority of whom are Serbs, but who also include among them some of Albanian and Turkish descent. PEN has received information that these individuals have been forced to leave their homes, some into exile, while others live in fear for their safety. In addition, they have suffered raids upon their homes by extremist elements of the ethnic Albanian community. They also report that during these attacks, books and manuscripts were destroyed.

Although the massacres committed by Serbs against Albanians in Kosova outnumbers the examples of revenge, I believe it is our responsibility as writers and intellectuals to  speak up against all acts of violence, whoever commits them, and whoever is their victim. Not in the least when these acts of violence are committed against colleagues who share the same universal human values as you and I do.

In December last year Dr. Bernard Kouchner, the UN Special Representative of the Secretary-General, made the aknowledgement that a properly functioning judicial system to handle instances of violence against ethnic minorities had not yet been established. On behalf of International PEN I wish to express our hope that you will also direct your attention to this problem and call upon the responsible authorities to deal with this urgently.
The spiral of violence must come to an end, and so must the terrible logic of revenge. As writers and intellectuals you have an important role to play when it comes to building a future civil society in Kosova where revenge will give way to justice, and where hate and violence are replaced by tolerance, democracy and human values. In this you may count on the continued support from your colleagues around the world.
Thank you very much for your attention.
Jens Christian Grøndahl
Danish PEN